This morning, I noticed more Monarch butterfly wings on the ground below the butterfly bush.  This only means that they died overnight.  I picked them up and decided to look at the tree to see if I could explain why this is happening.  It wasn’t until I was checking out the butterfly tree for a second time around that I noticed a green leaf move slowly.  I checked it out and there it was – the culprit, a Preying Mantis.  Although Monarchs are supposed to be poisonous, this little guy seems to have found a way around that.

I decided to  check this out and it seems that Preying Mantis have adapted to eat Monarchs.  I found this video in YouTube, which tells the story and it certainly happens at a blue butterfly bush.  Check out the link here http://www.youtube.com/watch?v=hfsJMKOMcis&feature=player_embedded

Here is a picture of my little guest (not so little) who is having a huge food fest. 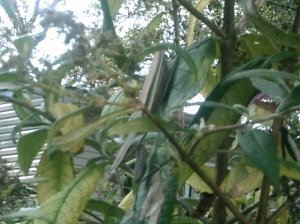 It is a bit tricky to see the Mantis because she is perfectly camouflage.  Focus on the center of the picture and there it is, in a vertical position heads down.

So the mystery is solved, and although I still feel sad about the fate of the butterflies, at least I am glad that the Mantis is surviving – it is the natural course of things, the cycle of life.

I don’t know what is happening with my blog but this is the second time I have to cut a post in two parts because when I publish the original it only shows half of it and the rest of the post is lost.  So back to the Monarch butterflies.  Here is the other half of the post.  Please refer to the previous post so you know what’s going on with these Monarch wings. 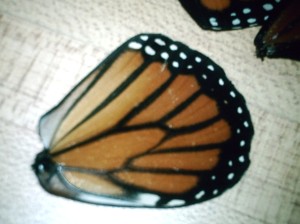 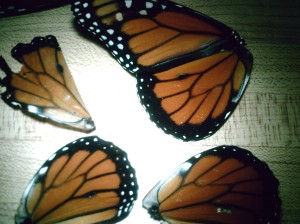 More male wings; there is one that looks as if it had been picked thru by a predator.  This is unlikely as Monarchs are poisonous to birds, insects, and mammals as they have milkweed in their system, from when the larvae nourished itself with milkweed. 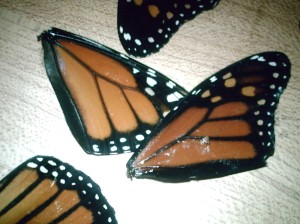 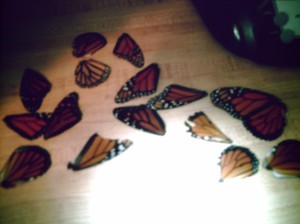 I don’t know what I will do with these beautiful wings, maybe I will frame them, but they are too beautiful to discard.  They remind me of the fragile beauty of this Universe and of how blessed I am to be able to admire it.  It is a priviledge that I don’t want to take for granted.

This morning, as I sipped my coffee outside, I was talking to my husband and noticed one Monarch butterfly wing on the ground.  I picked it up and was observing its beauty and for the first time realized that it feels similar to a bird wing, except thinner.  Then my husband told me that he saw another one behind the butterfly bush.  We went to see if we could find it and found tons of butterfly wings all over.  It was a sad and beautiful thing at the same time – the only way I can describe it.  I picked up the wings and believed that there most have been tons of butterflies that die; however upon closer inspection of the wings, I realized that maybe only 4 or 5, according to the wings remains.

What caused their death?  I am not sure, but the other day, as I was observing one that was flying I realized that it was too cold for them and wondered why they were still around.  I am not sure if these are the last generation of this year matting but it certainly looks that way, as their color is very intense and bright.  This means that these butterflies did not make it to migration to the south.  A few wings were showing sings of a predator picking thru it, but most were whole.  Later, I decided to learn a bit about monarch butterflies and found a great website which I will share with you for when you want to learn a few interesting bits of info – http://www.monarch-butterfly.com/

On my research I learned that most of the wings belonged to male butterflies, as they have a black dot in one of the veins.  I also learned that there are four generations in a year – March/April, May/June, July/August, and September/October.  The last generation is the only one that gets to migrate, the earlier generations die.  So I am not sure if these are from a third generation that died or from a fourth generation that was born and died due to the recent cold temperatures.  I doubt that they were eaten by predators, since Monarchs are mostly poisonous to birds, insects, and mammals due to their diet – Milkweed.

When we moved into this house there were no flowers or plants only grass.  Over 10 years, I had grown a garden and planted two butterfly bushes which feed a lot of butterflies and even the occasional hummingbird.  I get tons of hummingbird moths as well, an amazing sight.  One time I attempted planting carrots and got butterfly larvae eating on them.  I left the plants so the larvae could nourish from it and continue its life cycle.  The larvae was Monarch butterfly larvae.  It was feeding from carrots; however most information I have read points out that it only survives from milkweed.  I don’t know but they were eating carrot plants and pooping to their contentment.  Later that season I saw tons of beautiful monarchs being born.  One of them even came to me when I was sitting on my steps, and rested on my hand, as if saying thank you for feeding me.

Here are the pictures of this morning’s findings, what looked like tons of fairy wings. 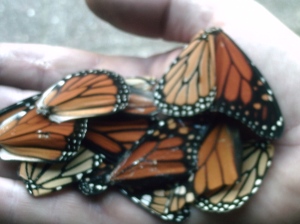 Monarch wing.  This is a male, see the black dot in the vein.  The rich colors suggest that this might be a fourth generation that never got to migrate. 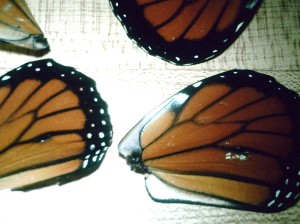 More male wings.  I think by the amount of wings we found on the floor, maybe four or five butterflies the most – two or three males and maybe the others were female.  These were Monarchs and not Viceroy butterflies which look very similar.  Check out this link to see the differences in the wing pattern, go down to the picture at the end comparing the two butterflies – http://en.wikipedia.org/wiki/Monarch_(butterfly