Over the past couple of weeks, I have been hearing a mysterious sound, and I thought it was farming machinery at a distance. It was a cross between light grinding and the engine of a plane flying very high, far. The sound seemed to be at a distance, and it stopped when we had continuous rain for almost a week. Today, the sound came back, louder and closer. It doesn’t stop. Finally, I realized that what was making this sound were tons of cicadas, which are due to come out this year in Virginia, West Virginia, and North Carolina. It is supposed to be Brood 9, which comes out every 17 years. I had seen a few funny looking creatures with black heads and big red eyes walking around, and shells of creepy crawlers over the past week or so, and while researching them, I found out what they were, but I never put the three together, mystery sound + creepy looking shell = cicada. They seem to be clumsy flyers, and today they are everywhere. I cannot use the side entrance because they have decided to park themselves near it, and even on the steps. I guess they are coming out of the ground or from a big old tree near that entrance. I have seen them fly down, and fall down from it. They walk and they just turn over, and take an eternity to flip back over again. I have seen them stretch out their wings and legs, as if coming out of a deep sleep, looking a bit messy, later to have stretched their wings. At first, I was disgusted by their appearance, by now, I am intrigued, and even caught myself talking to one that was near the side door, on top of the railing. Did I find it cute? I think I did. Today, there were more than 10 staring at me from the side steps, and it looked like an airport out there, when the sun was shining for the first time after a week of heavy rain. My husband tried to blow them away with a leaf blower, but they kept coming back. I think they like the blue color of the railing. Thank God they are staying on that side, and I can go out if needed via the front door. I am happy to have discovered what that mysterious sound was, but I cannot wait for these critters to come out and fly away, and disappear for another 17 years. I cannot decide if I like them or not, but I don’t want them near me. I was able to take a picture of one of them. Are you seeing these where you live? 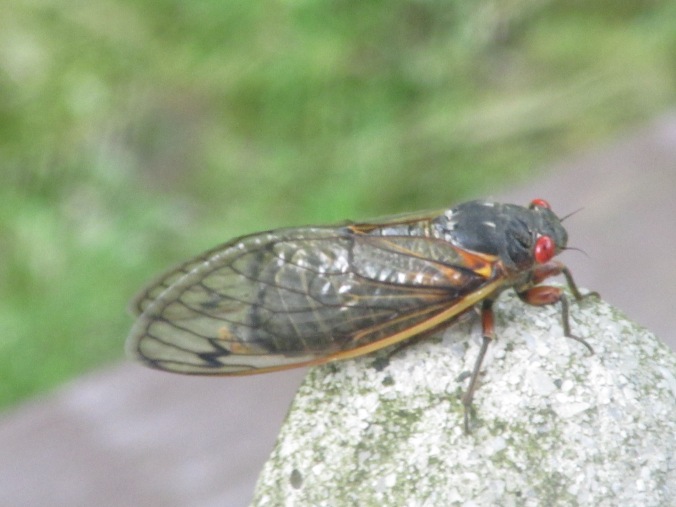